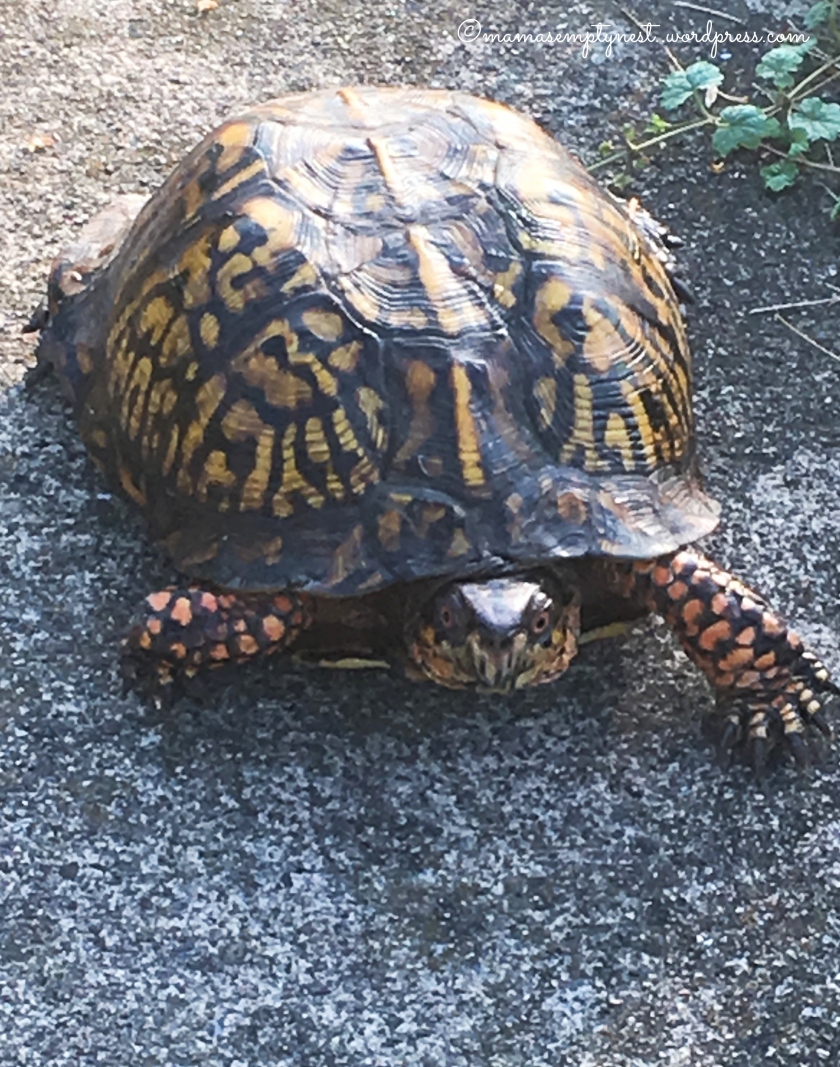 I imagine that most of my readers know the old tale of the tortoise and the hare.

The racing rabbit always moved at top speed and was so confident that he would win a race with the slow-moving, creeping-along pace of the tortoise hands down. Harry the hare was so darn sure he’d win he not only boasted about it, but he also stopped and took a nap along the way. But Terry the tortoise, plodding along but not ceasing, ultimately became the winner.

Moral of the story: slow and steady wins the race.

That old Aesop’s fable, especially the moral, came to my mind as I sat down this week to compose a new blog post and I remembered the photo above stored in my picture cache. On morning walks with my friend, we often see rabbits and once we met a turtle on the sidewalk. He ever so slowly moseyed along and of course, we passed him with flying colors, but not before I snapped a photo of him with my cell phone.  (I’m glad he didn’t ‘snap’ back.)

And that reminded me that all too many times I’m like the hare – racing hither and yon to accomplish a task. However, unlike the hare in Aesop’s tale, I often don’t take time to just sit and rest. My motto has always been once you start a job, finish it first, then you can stop and relax. I’m one of those impatient types of people who want the job done NOW.

But in the last few months, a household chore – no, call it a gargantuan task – had me racing as if I were a contestant in an old television game show from the 1950’s and early 60’s called “Beat the Clock.”  Anyone besides me remember that one?

What prodded me into warp speed? Papa and I have called our country house home for 21 years now – the longest amount of time we have ever lived in one place.  Being stationary in one spot, we’ve accumulated a lot of “stuff.” When we moved more often in the first 20-some years of marriage, we always purged. But now, our basement seriously looked like a hoarder’s treasure trove.

And I was determined to clear it out. With the onset of our oldest daughter and son-in-love moving into a house, where they now have plenty of storage, we hauled a load of her belongings to them. That made a bit of a dent.

Middle daughter has also stored way too many possessions in our basement, and she and I began sorting through it all, packing up items in plastic storage tubs for future use, and eliminating others. That made another dent.

But how to get rid of a boatload of perfectly good stuff that might bring a little extra cash for her and us as well? Why, hold a garage sale of course. You know, there’s a very good reason why I haven’t succumbed to this kind of expunging for 20 years – it’s a lot of WORK!

For months now, I have been culling through the basement stash, separating the wheat from the chaff so to speak. Setting aside the usable items that could most likely be sold and determining the rest which, frankly, just needed to be deep sixed in the trash or recycling bins.

As usual, I tried to work at Harry the hare’s pace, sorting, categorizing, pricing items, and packing them into boxes so that all that was required during the couple of days before the sale would be to unpack and set it all up.

Whew! It proved to be a huge task and I still had other household responsibilities to handle as well, not to mention conjuring up creative ideas for blog posts, advertising the sale on social media, scrounging up tables, making direction signs, etc.

Something had to give which is why I took a longer than a week-long break from blogging.

In the end, I found that working like Terry the turtle was far more productive for me. And as we hauled all the garage sale boxes to our actual garage and outside onto the driveway for the sale last weekend, lo and behold, our basement walls became visible!

“It does not matter how slowly you go as long as you do not stop.” ~Confucius

We did manage to eliminate much of it and make some garage sale goers happy with their finds. But there’s still quite a few items left over. Now it’s time to sort through it once more, pack it up, and find a donation center that will accept it. Unfortunately, right now, some of our thrift shop/non-profits are not accepting donations of this kind.

I’m determined, however, that the stuff doesn’t claim our basement as its home once more, so I’m reminding myself again…slow and steady wins the race.

Can I interest anyone in a few boxes of garage sale leftovers? I just may have something you might need because one man’s trash is another’s treasure, you know.

7 thoughts on “Words for Wednesday: Slow and steady”