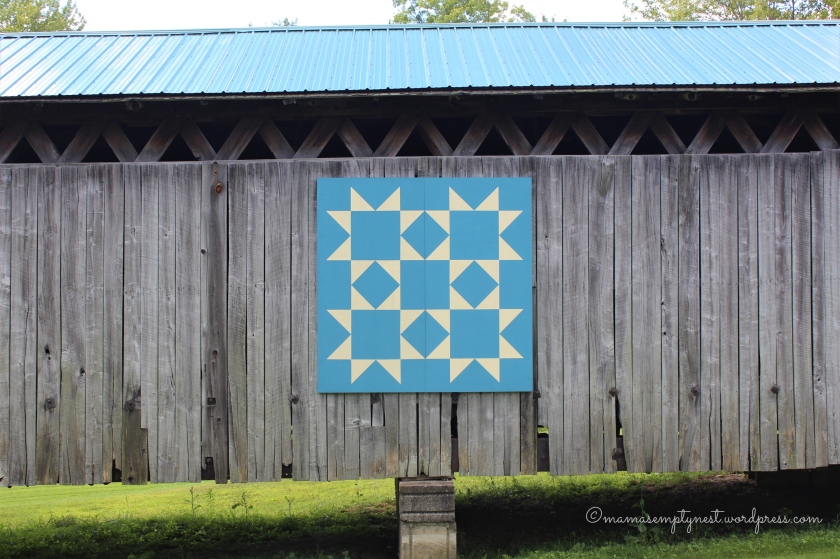 Sometimes you just stumble onto a treasure by happenstance, and when you do, it develops into a memory – one from the past to remember and revisit in the future.

As often happened during this past year of the you know what, Papa and I were once again grateful for a blessing. What makes us feel so blessed? Living in a rural area.

Even though plenty of travel restrictions prevented us from taking more than one vacation or far-away excursions, living where we do enabled us to venture out on road trips by car, partially satisfying our desire for exploring new-to-us places.

We set out one late summer morning in 2020 for such a trip. We ventured to the state next door – Ohio – for a bit of exploring another rural area we hadn’t visited before and where we wouldn’t have to worry much about social distancing and the like.

The focus of our destination was to locate covered bridges and on our way back home, catch some glimpses of a couple of lighthouses around Lake Erie. Happily, we accomplished both goals, but the covered bridge excursion truly revealed a treasure for us.

Little did we know that the county we chose to visit in the northeast corner of Ohio is considered the covered bridge capital of that state. Nineteen covered bridges, including the longest and shortest in the entire country (USA), are situated in Ashtabula County. The modern Smolen-Gulf Bridge holds the title of being the longest at 613 feet in length and the touted shortest is the 18-foot-long West Liberty Covered Bridge.

Seventeen of those covered spans are operational and open to vehicular traffic year-round. We managed to see a dozen of them in one trip and I decided to highlight those in three parts for my Tuesday Tour. Look for part 2 next week on May 4 with Part 3 posted on May 11.

The treasure we discovered is that visitors can travel on a 67-mile-long driving tour, called the Ashtabula Covered Bridges Trail or the “Covered Bridge Loop,” via country roads to view these unique bridges by using a self-guided driving map. Five types of construction are visible in the historic Ashtabula County covered bridges: Howe truss, Pratt truss, Town lattice truss, Burr arch, and Inverted Haupt truss.

Our first stop was Netcher Road Covered Bridge, which traverses Mill Creek in Jefferson Township. This bridge, at 110 feet long, 22 feet wide, and 14½ feet high, features a single span of timber arches with inverted Haupt walls and is classified as “Neo Victorian” design. However, it is not a relic from the past but instead is one of the newest covered bridges since it was constructed in 1998 and was funded by a state department of transportation grant. Netcher Road bridge is located about two miles east of Jefferson, Ohio.

Bridge #2 on our driving tour was South Denmark Road Covered Bridge, also crossing Mill Creek. At 81 feet in length, this Town lattice style span was built in 1890.  It’s only 2.7 miles away from Netcher Road Bridge, but because of construction/road closure occurring at the time of our visit, we could not view this bridge.

Another newer bridge, erected in 1986 to celebrate Ashtabula County’s 175th anniversary, is the Caine Road Covered Bridge.  With a single span Pratt truss design, this 124-foot-long structure crosses the Ashtabula River in Pierpont Township and is 6.7 miles from the South Denmark Bridge.

The next stop on our driving tour enticed me even more than previous ones. Sitting in a small park along the south side of Graham Road is the aptly named Graham Road Covered Bridge. Interestingly, this 97-foot Town truss span was re-built from the remains of a damaged bridge that washed downstream during a flood back in 1913. It originally crossed the Ashtabula River in Pierpont Township, but was relocated in 1972 near its original site. Not open to vehicle traffic, a distinguishable aspect of this renovated bridge is the quilt block design painted on its side.

The artwork on the side of a historic covered bridge will remain in my memory and I’ll smile each time I gaze at that photo (at the beginning of this post). Memories of a lovely summer day’s travels and sights are added to yet other special thoughts. That pretty quilt-block design reminds me of my mother, who loved to fashion and create beautiful hand-made quilts.

Memories that last become treasured keepsakes in our minds, don’t they?

“Keep all special thoughts and memories for lifetimes to come. Share these keepsakes with others to inspire hope and build from the past, which can bridge to the future.” ~ Mattie Stepanek