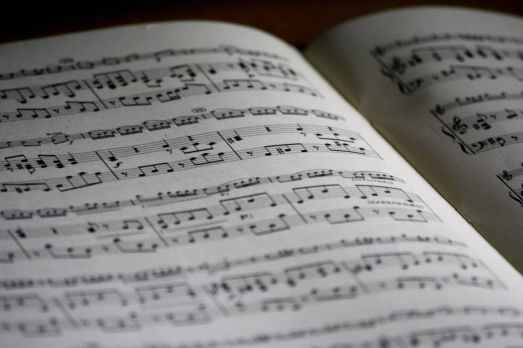 Silence is not golden anymore.

I seem to write about songs quite often in my blog.  You might say the music channel switches on easily in my mind.

Sometimes speaking a mere word immediately reminds me of lyrics and music to some tune.

It’s a gift, I think. Or maybe it’s like the ancient Greek philosopher Plato once said, “Music and rhythm find their way into the secret places of the soul.”

But even though music has always taken up permanent residence in some section of my brain, I very seldom listen to music any more.  I find that a remarkably strange conundrum and I am quite baffled over it because music has always inspired me, lifted my spirit and often brings me to tears.

I grew up in a household where music serenaded my ears.  My sisters and I all took piano lessons, so someone tickled the ivories almost every day.  And my family sang together at the piano often.

My mother listened to the radio daily as she performed her household chores and cooked home-made meals.  As a child, I awakened every morning to the sound of that radio playing in my mother’s kitchen.  My sisters kept the record player spinning, and I can still sing the lyrics to many golden oldies.

My dad, especially in his later years, possessed an extensive collection of tapes and CDs and passed many hours listening to his music.  My maternal grandmother sang melody after melody with me as we rocked our blues away together in her special chair.  A dear older friend of the family taught me how to sing alto and harmonize.

As a teenager and college student, music continued to maintain its importance in my life.  I listened to it; I bought it in the form of records or cassette tapes; I attended live concerts to experience it; I played it on piano, and I sang it.   Music wafted from my stereo or my car radio at all times.  I would even fall asleep to it.

For many of my adult years, I joined choirs, performed in church musical productions and continued playing the piano for enjoyment.  I attended orchestral concerts, operas, ballets, and live stage musicals.  When I became a mother, I taught songs to my children and listened to their music from piano lessons to chorus and band concerts.

But somewhere along the line, I stopped wanting to listen to music and preferred silence.  At home, I turned the radio on less frequently while I cleaned my house.  I seldom played the stereo and the shelves of albums, tapes and CDs became dust catchers.

Music sometimes even irritated me.  In the car, I rarely drive with the radio tuned in or a CD playing.  My husband downloaded songs he thought I would enjoy on an MP3 player for me, yet I hardly ever use it.

I’m mystified as to why the music in my life suddenly turned mute in the audible world, although it still resonates in my head at the drop of a hat.   Did my life become so stressful that silence was more agreeable to me than the lilting strains of a violin, the trills of piano keys, the strum of a guitar or the human voice in melodic song?

I don’t know, but I want my music back.  Today it was quiet in my office, too quiet.  My fellow staff members were cubbyholed into their own offices and the silence became unbearable to me, perhaps because there is so much of it in my home, the empty nest.

So for the first time ever in my office, I called up Pandora on the internet and devised my own radio station of songs on my computer.  For most of my work day, I actually listened to tunes while I worked and I hummed along and at times I even sang a little.

And I realized in my book of Opportunity on Page 17, Chapter 1 (January 17), that I’ve still got the music in me.

“Life is one grand, sweet song, so start the music.”  ~Ronald Reagan

Do you remember the 21st night of September?”

For those of you too young to remember, that’s an old disco song performed by a group called Earth, Wind and Fire.

For some reason, songs really stick in my brain and I can recall lines from songs better than remembering what day is trash pick-up day.

Speaking of trash, some of the songs being played on the airwaves today should be relegated to the trash bin if you ask me.  I often wonder what will happen when the younger set becomes the older generation.  Will they look fondly back to their “golden oldies?”   Will they wistfully listen once again to today’s songs and reminiscence about days gone by?  You know, songs from Lady Gaga and Eminem.

Many of today’s hit songs would make a well-seasoned pirate blush, that’s what I think. Songs from yester-year are mild and tame in comparison, but even better yet, they are tasteful.  Even in the rebellious years of the 60’s and 70’s into the me-decade of the 80’s, most songs did not have foul language in their lyrics, let alone sexual language too crude to even think about.

Call me old-fashioned, but give me the real oldies – songs from the late 50’s and 60’s.   My sisters were in their teens in those years and  songs from that era are filed away in my memory bank because I heard those songs a lot back then.  My oldest sister would have “pajama parties;”  we call them sleepovers today, except back then no one would ever think of inviting boys to a sleepover!

Sis would set up her pink and grey record player, with a big stack of 45’s waiting near by to be played during the party.  Yeah kids, record player.  Songs were recorded on vinyl discs called records – small ones were 45’s and they had one song recorded on them.  They were played on a contraption which had an arm with a stylus (needle) inserted into it.  As the record revolved, the stylus picked up vibrations off the grooves in the records, which magically emitted music from the record player speakers.

So Sis would invite all her teenaged girlfriends and they would dance to the records, eat snacks,  and just have fun all night, I assume.  I was never allowed to stay up for those parties because I was just a youngster of four or five.  The pajama parties were usually held in our basement, and I would sneak down the stairs part-way, sit on a step, and watch with envy as the girls danced, laughed, and squealed at their fun.  My sister would shoo me back up the steps, but sometimes one of her friends would take a shine to me and let me come down to dance awhile.  I not only remember the parties but the songs on the records they played.

Songs like “Cathy’s Clown” and “Wake Up Little Susie” by the Everly Brothers, “Soldier Boy” by The Shirelles, “Papa Loves Mambo” by Perry Como, “Love Letters in the Sand” by Pat Boone, “The Monster Mash,” “Leader of the Pack,” and the list goes on and on.  Simple music from a simpler time.

My adolescent years took place in the 60’s and early 70s’s.  The music from that time is also ensconced in my memory.  The first record I ever purchased was “Mrs. Brown, You’ve Got a Lovely Daughter” by Herman’s Hermits.  I listened to typical teenage fare back then and graduated to songs by Elton John, The Doobie Brothers, and Chicago in my college years.

And then the disco era hit. By then hubby and I were married and starting to settle down.   The songs from the late 70’s, 80’s, and 90’s are scattered in my memory.  I was too busy producing and raising children to listen much to popular music, but I do “remember the 21st  night of September…Say do you remember, ba dee ya, dancing in September, ba dee ya, never was a cloudy day.”

If I wasn’t still sick with this nasty flu bug, I’d get up and dance.  No energy though.  Fits of coughing would ensue.  So I’ll just watch this little guy boogie on down.  Come on, get up and boogie with him, you know you want to!