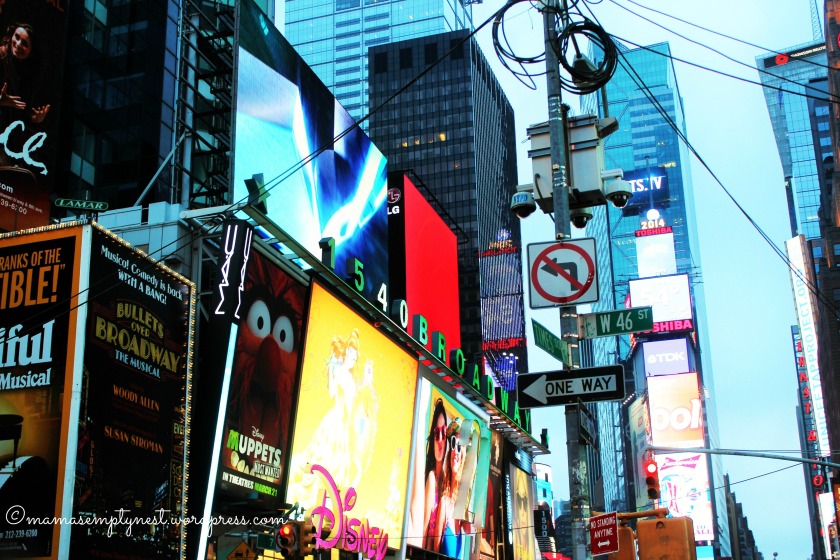 It’s the subject of this past week’s WordPress photo challenge.

The first thought that comes to mind when you encounter the word vibrant may be vivid and brilliant color. Many bloggers chose to go that route with their photographs depicting that word and you can view their entries by clicking on this link.

But the more I’ve pondered on the word this week, another thought pervaded my mind.

So plucking my trusty American Heritage Dictionary of the English Language off the shelf here in our home office, I checked the definition of the word vibrant.

The first definition: “Exhibiting, characterized by, or resulting from vibration; vibrating.” No, that wasn’t quite what I was thinking.

So I continued to read the second definition: “Pulsing with energy or activity.” Yes, that was it!  That’s what floated around my brain all week.  Vibrant meaning lively, vivacious, exciting.

Immediately, I knew which photograph I would post for this challenge – a quick capture I snapped standing in Times Square in New York City.

After a day-long excursion around the Big Apple, Papa, our son and daughter-in-law, and I rode the subway to Times Square for dinner and to sightsee some more.  As we ascended the stairs from our subway stop to street level, I instantly sensed the feverish energy and almost manic activity of Times Square.

All of my senses heightened.  It was evening and the myriad of flashing brilliant neon lights and signs flooded my eyes.  The noise level increased tremendously as we brushed against the crowds of people on the sidewalk. Everywhere you turned something to observe or hear or experience presented itself. Sensory overload, but in a good and exciting way.

Times Square definitely pulsed with non-stop energy and exhilarating activity.  And if that isn’t an example of vibrant, I don’t know what is.

“There is something in the New York air that makes sleep useless.” ~ Simone Beauvoir

In my book, two diverse kind of nights exist.  You may experience nights full of blissful rest when you fall asleep quickly and don’t awaken until morning light.  But then there are those other nights – those that occur when sleep is disturbed or is nonexistent caused by a crying baby or anxious thoughts or too much caffeine or simply insomnia.

Sometimes we eagerly embrace the night and sometimes we wearily dread it.

Nighttime is two-faced not just when it comes to our rest but also where we choose to spend the dark hours of our lives.  Its difference seems most pronounced between city and country.  Nights spent in the city are never completely dark (unless there’s a blackout) as brightly lit signs and traffic lights produce a glow no matter what time of night it may be.  Those kind of nights can prove invigorating and no doubt whoever penned that old disco song with the lyrics, I love the nightlife, was writing about nighttime in the city.

Country nights provide quite a contrast.  When evening draws nigh and the sun finally sinks beyond view, darkness – real darkness – descends.  On a clear, cloudless evening, you gaze upwards and are greeted by a sky dotted with more shining stars than you can count.  The only gleaming glow around may come just from a silvery moon casting its luminescence on earth or a brightly burning bonfire blazing in the back yard.

Regardless of whether your preference is illuminated by the incandescent city night or enveloped in the darkness of a country nighttime, you can always find something to remember, a nocturnal memory to add to the days of your lifetime.

“What I take from my nights, I add to my days.” ~ Leon de Rotrou

That’s all folks!  I hope to get back to writing some posts for next week.

Part 3 of our day in New York City will be posted tomorrow.  Hope you stop back for the rest of the tour!

I’ll post Part 2 of my NYC slide show on Thursday. 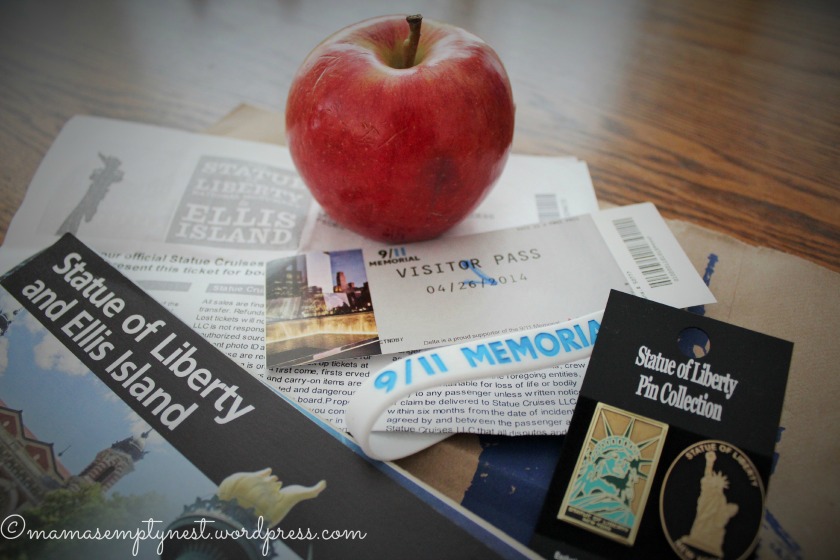 I lost my apple in the Big Apple.

It’s true. One minute, my shoulder bag possessed a nice juicy Gala apple just waiting for me to sink my teeth into it.  That apple was intended to suffice as a snack tiding me over until we could make our way to our late lunch stop for the day.

The next minute that apple was confiscated, snatched out of my bag by one of those security eyeballers and tossed into the nearest trash can. My stomach grumbled while my legs moaned and groaned during the 178 step climb to the pedestal of our nation’s Lady Liberty.  I didn’t even think about attempting the 354 steps to her crown.

All of my children and even my husband have visited New York City, the Big Apple, on several occasions. But not me.

So when Papa and I planned a long weekend trip to visit son and daughter-in-law who currently live close to the big city, they decided to arrange a day long excursion into NYC so I could cross a visit there off my bucket list. Except I don’t really have a bucket list, but if I had one, I’d now have a line through

Yep, it was this country girl’s very first visit into Manhattan. I’ve been to Staten Island helping clean up after Superstorm Sandy, but not into the hub bub of New York. So this was a trip of firsts. First ride on a New York subway ever. I survived and even had people offer their seats to me, which kind of shocked me at the kindness of strangers. Early in the day, I thanked them but declined since I was determined to grasp tightly to the bar, swaying and balancing and not even bothered by the crowded subway car. That’s a first of sorts too, not becoming claustrophobic in a crowd.

Next we boarded the ferry and set sail for Liberty Island to see the majestic Statue of Liberty. First time seeing her in person, but not the first time I’ve taken a ferry. The ride was fabulous and watching the NYC skyline get smaller as Lady Liberty got larger was priceless. From there, we boarded another ferry and traveled to Ellis Island, imagining the island swarming with immigrants and the excitement they must have felt finally arriving at this new land of opportunity and promise.

Back on the ferry to head back to Lower Manhattan and Battery Park;  from there we walked and walked. And then walked some more. Son had an itinerary lined up for the four of us and his smart phone served as our map. We headed towards the new World Trade Center, a spectacularly tall and interesting building with a stop on the way at our lunch destination – Shake Shack.   I will confess it felt good to give the legs and feet a rest and since it was such a nice, warm day, we ate outside in the seating area only occasionally dive-bombed by pigeons.

After more walking and a little rain shower which didn’t damper our enthusiasm, we arrived at the site of the 911 Memorial where, after going through more security, we viewed the reflecting pools. Aptly named, the pools, surrounded by etched names of each person lost in the attack, did give us pause for reflection on that horrific day back in 2001. A white rose inserted into one of the engravings made for poignant thought and picture.

Another site we wanted to view was Trinity Church, where George Washington visited and prayed for our new nation after his inaugural as the first President of the United States of America. A giant sycamore tree actually took the brunt of the 911 disaster and protected the church from harm. A sculpture of the remnants of the tree is showcased in front of the building.  I found the old cemetery smack dab in the middle of a bustling metropolis to be interesting.

By this time, it was late afternoon heading into evening and we decided to take a respite from all of our walking by sitting for a while at a Starbucks near Broadway and Wall Streets. Loaded back up with more energy and caffeine, we took the subway to Times Square.

Walking up the steps from the subway to street level in Times Square was like sensory overload! The lights, the crowded sidewalks, the noise, and the flashing neon signs bombarded us everywhere we looked. We passed the famous (or should I say infamous) singing and guitar playing cowboy in his whitey tighties on the corner. My eyes couldn’t take it all in (well, in the case of the cowboy, my eyes didn’t want to!). It was everything I imagined it to be and more and while I certainly wouldn’t want to experience Times Square every day, it truly was fun!

We ogled the sights and ventured into the M&M store where we drooled over the wall of M&Ms on the second floor. Behind plexiglass was every color of M&M candies of the rainbow and every type – all for the mere price of $12.99 a pound! Son and daughter-in-law filled a bag and we all enjoyed sampling them the next day. Birthday cake flavored M&Ms were a new one to me.

Dinner reservations were at Carmine’s, a family style Italian restaurant which was crowded and very busy on a Saturday night. We enjoyed a delicious meal but being in the company of son and daughter-in-law was the best part of the entire day.

Walking to catch the subway, we noticed the Empire State Building ahead of us and the combination of the overcast evening sky and the lights from the building made an interesting photo I thought. With stops at Penn Station, we finally headed back to New Jersey on the PATH subway. On the way back, I thought back over our busy day of sightseeing in the big city.

So here’s my take on the Big Apple. New York. It’s loud and noisy. It’s garish and gaudy. It’s crowded and it’s in your face. And it’s dirty and grimy; I felt like there were umpteen layers of dirt settled on my face and I couldn’t wait to wash. But I found New York City ugly and beautiful at the same time. There’s something so invigorating about this city, so intoxicating that it grabs you and makes you like it.

Two things stood out in my mind. First, I couldn’t believe that I lasted the entire day without being totally exhausted which goes to show you that an exhilarating time produces enough adrenaline to keep you going. Second, this country girl thoroughly enjoyed her first visit to the Big Apple. Can’t believe I’m saying it, but “I love New York!”

Of course, I wouldn’t want to live there because I love my quiet, simple country life, but New York City sure is one electrifying place to visit. And I have our son and daughter-in-law tour guides to thank for that visit.

“When I’m in New York, I just want to walk down the street and feel this thing, like I’m in a movie.”  ~ Ryan Adams

P.S.  I’ll post a slide show of photos from our trip next week.