Over 50 years ago as an elementary school-aged child on a classroom field trip, I visited the Carnegie Museum of Natural History and Art for the first time.

Just to offer a bit of historical reference about this famous Pittsburgh, PA landmark, the museums were founded by the wealthy businessman and philanthropist, Andrew Carnegie, in 1895. The original building which housed the fledgling museum was called the Carnegie Institute and also held the Carnegie Library.

The next year, the first Carnegie International, an exhibition of contemporary art, took place.  After that, the museum began acquiring a vast collection of artwork.

When Carnegie learned that prehistoric creatures’ bones were being uncovered in the western part of the United States, he sent crews of scientists to Wyoming where they discovered the first dinosaurs.

Dinosaur Hall was one of the aspects of the Carnegie Museum that I remember well from my first trip there. The other portion that I recall was the Hall of Architecture. When Papa and I visited the museum last month, I was pleased to find it still looked like it did all those years ago.  It was just as impressive and awe-inspiring as I remember it to be.

The Hall of Architecture, which first opened in 1907, is beautiful with its expansive space lit by a skylight ceiling. During that era of time, collections of casts were popular, so Carnegie’s institute began collecting architectural casts, plaster reproductions of classical sculptures, and bronze replicas. Today that collection is the largest in the United States. 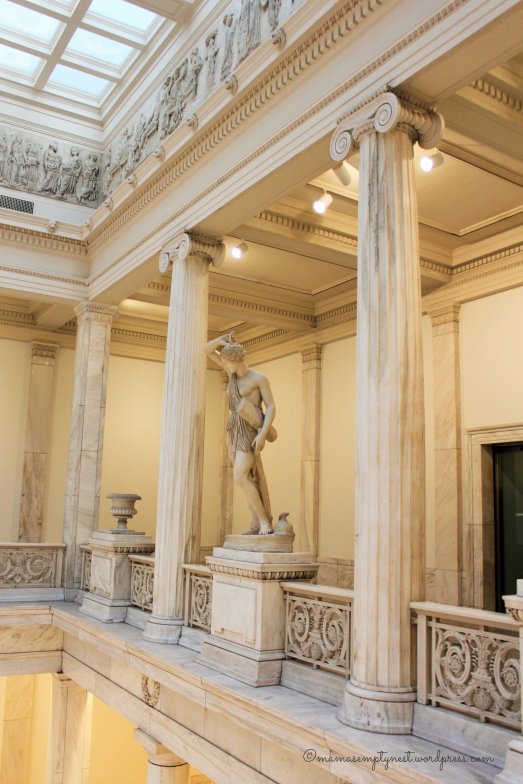 To say the Carnegie Museum of Natural History and Art is a gem is an understatement. Those who visit Pittsburgh should definitely include it on their list of “must see.”  They will not be disappointed. We certainly weren’t.

“As an architect you design for the present with an awareness of the past for a future which is essentially unknown.” ~ Norman Foster