Why did the chicken cross the road?

When you live in a rural area, you’re always on the alert when you’re driving on back country roads.  All sorts of critters can suddenly appear on the pavement ahead of you and you never know what you might see scurrying off.  Often it’s deer.  Or sometimes, it may even be a bear.

But usually you encounter smaller creatures – groundhogs, raccoons, possums, rabbits, squirrels, chipmunks, maybe even a wild turkey or pheasant.  On one of the side roads near our house, chickens roam free and I often must apply my brakes to avoid hitting one as it darts across the road.

Early one morning I was on my way home from having some lab tests done at our local hospital.  Since it was my day off work and pleasant cool weather, I decided to take the ‘scenic route’ and travel some back roads home instead of jumping on the four-lane highway. 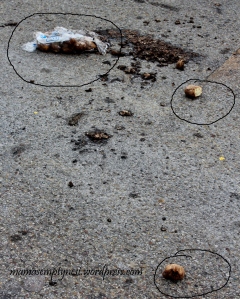 As I meandered along, I spotted some of the usual wild creatures sprinting across my path.  But in all my years of driving country roads, I’ve never encountered what I’m going to tell you next.

What appeared to be someone’s dinner plans were sprawled out on the pavement.  At first glance, I thought it was just litter but as I neared the scene, I honestly exclaimed, “What the heck?” out loud.

What surprised me so?  It appeared to be a  chicken.  A plucked, cleaned chicken without head or feet laid smack dab in the middle of the road.  And further along rested its dinner companion – a plastic bag of potatoes.

Obviously, I’ve seen a ton of road kill in my lifetime but this one beats all.  I maneuvered my car around that naked for all the world to see fowl laying so unceremoniously there, pulled over and grabbed my camera to shoot a few pictures.  Because this was one for the books.  This was one unbelievable tale.  Who would believe me if I didn’t have photos to back up my claim?

Then I realized it wasn’t a chicken, but a small turkey.  Not a wild turkey, but the plump kind you buy at the supermarket.

And it had met with foul play because it was missing a leg!  Yep, a drumstick had been ripped or chewed right off, probably by a wandering dog or maybe even a coyote.

So how did the turkey get there?  I don’t know if someone, on his way home from the grocery store,  got angry and decided to chuck the whole idea of making dinner by throwing fowl and potatoes out the car window…or maybe it fell off the back of a pickup truck although there were no grocery store bags lying around….or ???   I’m out of scenarios.  This one has me stumped.

But all that thinking about fowls did make me a little hungry for a trip to Chik-Fil-A.  Oh wait, I live in the country.  There aren’t any here.  Just store-bought turkeys….lying on the road….with potatoes.  And that’s no joke.  Ah, life in farmland.

And with that thought, I’ll leave you with a chicken joke.  Why did the chicken cross the road?  To prove to the possum it could actually be done.  (You can groan out loud and cry foul now!)