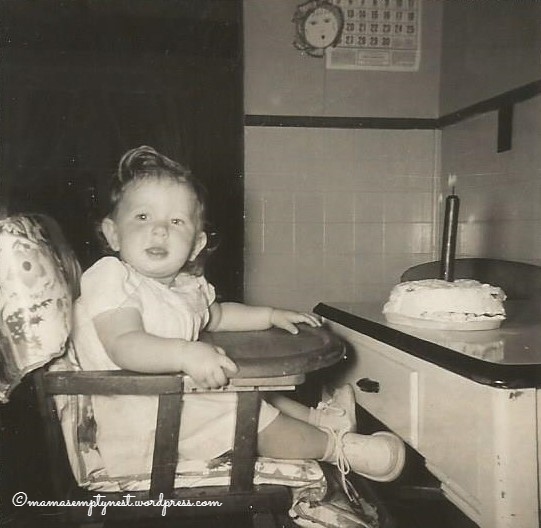 Several decades ago on this very day, a baby girl was born to a mother and father, welcomed into a family with two older sisters, and brought home from a community hospital in the one car the family owned at the time to live in a modest two-bedroom, one bath home a few miles outside a small, picturesque town in middle class America.

It was during the 1950’s, a decade that many older Americans reflect back upon with nostalgia and pleasant memories.  That era became a period of prosperity and well-being after the perils and difficult times of World War 2 in the 1940’s.

At the onset of the 50’s, one could purchase a new house for an average cost of around $10,000 and a new car for between $1500-2000. The average wage earner made around $4000 a year and it only cost 21 cents a gallon to fill up your vehicle’s gas tank. You could buy a can of Campbell’s tomato soup for a dime, a pound of coffee for less than 40 cents, and a roll of toilet paper for a nickel.

It was a decade when newly birthed rock and roll reigned the radio airwaves and Elvis the Pelvis (Elvis Presley) started his skyrocket to fame. Poodle skirts, bobby socks, hula hoops, and other fads became popular.

Television shows like I Love Lucy and The Rifleman rapidly replaced radio serial programs as one of the top forms of entertainment and the first frozen TV dinners were produced by the Swanson company. Movies galore were made starring Charlton Heston, Marlon Brando, James Dean, John Wayne, Marilyn Monroe, just to name a few and a movie ticket only cost a few cents.

The population of the United States soared to over 150 million because of a baby boom, which is why those of us born during those years are called baby boomers. Both Alaska and Hawaii were added as states to our country. And by the end of the decade, the first astronauts, former military pilots, were chosen to begin training for ventures into outer space.

But all was not rosy and perfect in the 1950’s. Another outbreak of war occurred in Korea and the American military was back in battle. Stirrings of another conflict to come in Vietnam were beginning. The threat of communism’s spread initiated a Cold War, while U.S. Senator Joe McCarthy sought to weed out communists on our home turf but was later censured for his ‘witch hunt’.

For more interesting aspects about that decade in America, you can view this video I found on YouTube. It’s a trifle long and is broken up by some ads (which you can skip), but it’s fun to watch if you lived in the 1950’s and even if you didn’t.

How do I know all of these facts about the nostalgic 50’s? I was the baby born on this day in the early years of that decade of history. And even though I was a young child during those years, I do remember many details about that era of time.

And I can hardly believe that the onset of the 1950’s decade was 70 years ago. I have a couple more years before I hit that landmark, but today on this day of my birth, I am left wondering how all those years have slipped by.

My father, wise in his 90 years of life, once warned me that as you get older, the years fly by in a whirlwind. And he was correct.

“In retirement, the passage of time seems accelerated. Nothing warns us of its flight. It is a wave which never murmurs because there is no obstacle to its flow.” ~ Sophie Swetchine

I’m married to someone who spends quite a bit of time in the past.

He doesn’t necessarily pine for the past, he just likes reading about it, learning more about things that have happened before, visiting places from long ago.

He is a history lover. You know how they say “Hindsight is 20/20?” Well, in hindsight, looking back over his past career choices now that retirement looms near, my husband thinks he would have enjoyed being a history teacher.

The book shelves in our home office are lined with history books collected over the years. And the papa of this empty nest has read every single one of them, some over again. He soaks up historical facts. He lingers over museum displays, reading every item. He watches historical documentaries on television or DVD.

History is just one of those aspects of life on this earth that appeals to him so much and he enjoys immensely. And while I don’t have nearly the same enthusiasm Papa has for history, I do appreciate it. I believe we need to know where we’ve been so we can move forward into the future. We need to know what mistakes we made in the past, so we try not to repeat them. We should learn and understand what our forefathers accomplished when our great nation was just beginning.

Comprehending history from yesterday helps us be thankful for today, this very day in my 30 Days of Thanks Giving.  As the day set aside to commemorate Thanksgiving arrives in less than a week, I thought it would be interesting to remind myself (and you, my readers) how this day came to exist as a national holiday here in the United States.

Watch the video below and perhaps, appreciate the history behind Thanksgiving Day and those who came before us to commemorate the day.

“The focus of Thanksgiving should be a reflection of how our lives have been made so much more comfortable by the sacrifices of those who have come before us.” ~ Emmons 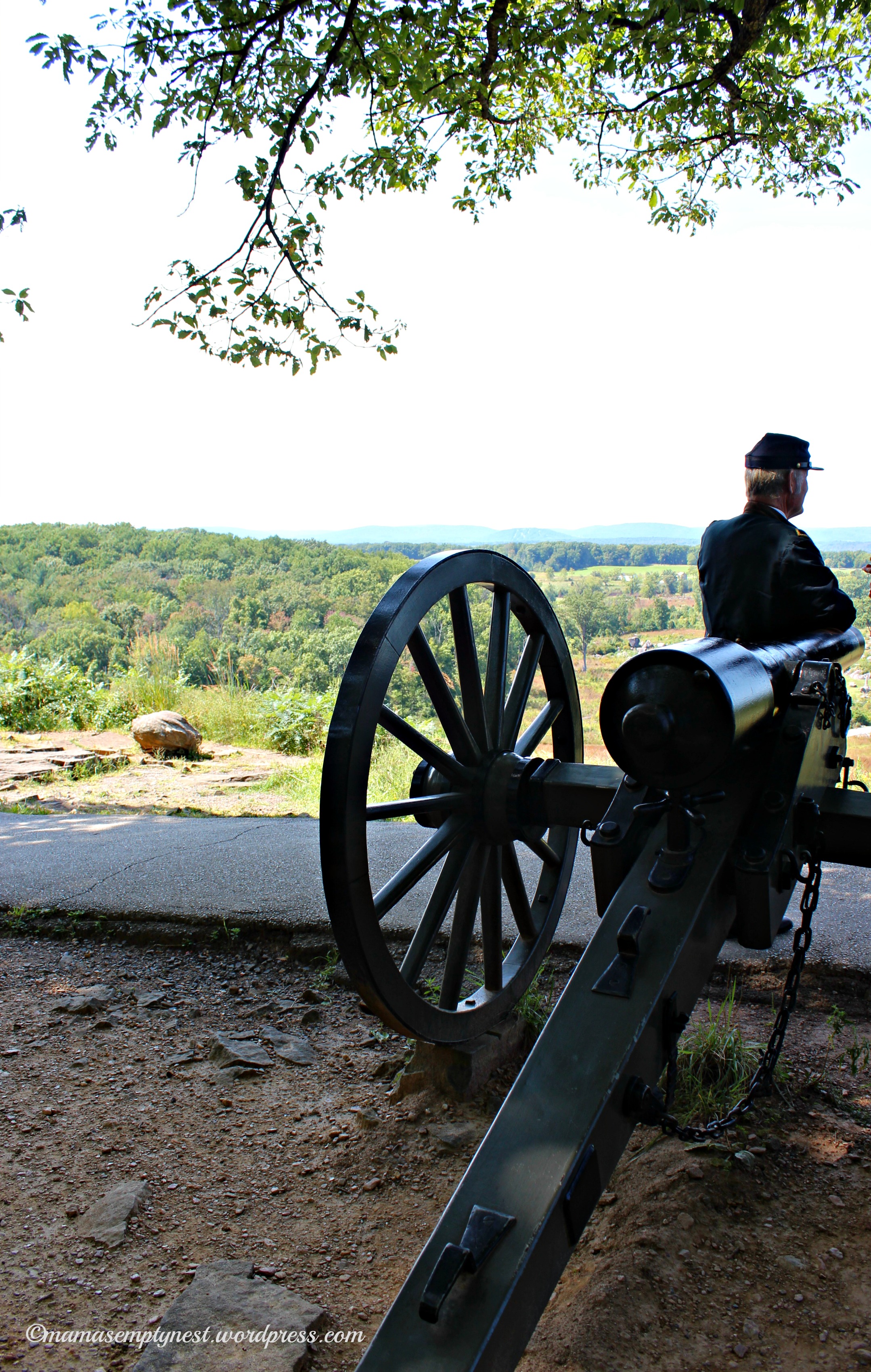 Those are the words that cross my mind as I gaze at this photo I took recently.

An idyllic late summer day in beautiful countryside. A stately oak shade tree to pause beneath for a bit of rest. A time-worn but lovely farmstead surrounded by rustic log fencing providing a scenic view.

All of that captured with just one click of the camera.

Viewing that photo invokes feelings of blissful peace. That all is right with the world. No turmoil. No bickering. No troubles.

A kind of peace in the valley.

No sorrow. No sadness. No headaches. No heartaches. No confusion.

But looks can be so deceiving, can’t they? And they can mask what lies beneath.

This occurs to me as I think about those I know who are experiencing difficult times. Losses beyond belief. Turmoil and confusion. Sadness and grief. Yet, you wouldn’t know it from their outward appearances.

They put on a façade. A happy face. A smile and words spoken with a lilt to hide their pain.

They assure everyone that they are ‘just fine, thanks for asking.’ But inwardly, overwhelming emotions rise up threatening to destroy them. How many of us stifle our true feelings down inside? How many of us don’t expose what lies beneath the surface of our smiles?

Recently, we spent a few days away from home. We journeyed to an area of our state where there are verdant rolling hills, farm fields, and plenty of historical places of interest.

Yet this place once was a scene of massive destruction – not so much of property, but of human lives. Over 7,000 men lost their lives in this one place. Another 33,000+ were wounded and almost 11,000 were listed as missing. All told, 51,000 casualties.

It was the scene of the bloodiest and most gruesome battle ever fought on American soil all occurring in the heat and humidity during three days in July in the Pennsylvania countryside over 150 years ago. The agony and suffering which occurred there is unimaginable.

This place is Gettysburg.

Today there is peace in that valley again. The battle scarred land is well-healed over after a century and a half. The only remnants of that fierce combat that remain are the massive monuments, which mark the spots where troops fought and fell, scattered across the 24-mile long battlefield driving tour.

And there are graves. Hundreds of graves, some marked, some only categorized by numbers.

Touring the battlefield, it’s hard to imagine the savagery that took place in this idyllic countryside. It’s difficult to imagine the bloodshed, the almost inhuman cries of war, and the moans of death when everywhere you look, you see the loveliest landscape.

And this is where I took that beautiful photo above these words. Tranquil scenery that masks what lies beneath the ground – the tragic loss of so many lives in this place. A time in history which practically tore our nation apart at the seams.

I’ve visited this place called Gettysburg in the past, touring the battlefield, reading the historical facts. But this time, something welled up inside of me like never before. The Battle of Gettysburg became more real, not just a story in a history book.

What lies beneath this picturesque scenery touched my heart and soul. The pain and anguish of a war among ourselves, American against American, rose from beneath the surface and gave me much pause to think.

I pray we never experience such a time ever again.

And yet, aren’t we waging a kind of civil war again today? Attempting to destroy one another, not with muskets and cannon fire, but with vitriolic rhetoric just because we don’t agree with one another’s viewpoint, or politics, or religious beliefs?

We fire vehement words to our ‘foes’ that surely pierce the soul and wound the heart. What lies beneath this modern civil war? Hatred? Anger? Fear? All powerful weapons of destruction.

It seems to me as a follower of Christ, that I should pray for those who hide their burdens deep inside – beneath the surface.  The walking wounded are among us, sometimes carrying their burdens in silence, but just as often lashing out at those who don’t agree with them with vehemence.

Just as the many homes and businesses of Gettysburg became field hospitals for the casualties of the great battle fought there, our churches should be a balm for the wounded, the broken, the hurting.

“Church isn’t a museum for good people, it’s a hospital for the broken.” ~ Unknown

When we come together brother to brother, sister to sister, to help, encourage, and shoulder the load the weary and burdened carry, just as I see happening in Texas and Florida after the vicious hurricanes laid paths of destruction, instead of battling each other, that’s when we heal our land.

For me, that’s what it means to be an American.

“What we see often is only a fractional part of what it really is.” ~ Unknown