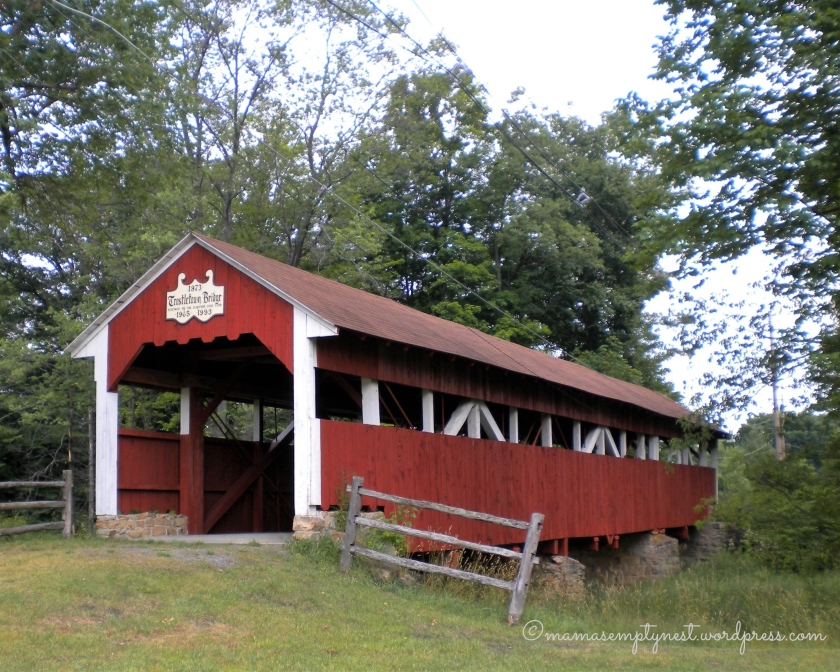 Located in many communities, throughout not just America but internationally as well, are groups of people whose motto is “We Serve.”

I’m referring to a non-political, service organization known as the Lions Club. I have a bit of knowledge about the good and beneficial projects these clubs perform because Papa once belonged to a Lions Club and even served as King Lion (President) of a local chapter.

So how does the Lions Club pertain in any way to my Tuesday Tour of covered bridges? Read on please.

Venturing around some country roads in Pennsylvania’s Somerset County back in the summer of 2012, Papa, our oldest daughter, and I discovered the Trostletown Covered Bridge, one of only two surviving multiple kingpost bridges in that county.

The three-span structure features three pairs of kingpost trusses with queenposts and is covered with half-height plank siding and an asbestos shingled gable roof.  Located in Quemahoning Township near Stoystown, this historic bridge was built over Stonycreek River near property that once was owned by Daniel Trostle’s mill.

Conflicting dates appear concerning the year of its construction. Some indicate Trostletown Bridge, also known as Kantner Bridge, was erected in 1845 by an unknown builder. Other research shows the bridge being built later in 1873.

However old it is, this 104-foot long and 12-foot, 8-inch wide covered bridge is one of 10 in Somerset County, still stands in its original location on original cut stone abutments and stone and mortar piers, and was added to the National Register of Historic Places in 1980.

Because of the ongoing preservation of the bridge, Trostletown Covered Bridge, which was re-dedicated in 1993, is in good condition but is now only used for pedestrian traffic.

Since our visit back in 2012, a new attraction has been added to the bridge. Visitors can view a restored conestoga (covered) wagon parked inside this interesting piece of history.

Thanks to the Lions Club extending their hands of service, Trostletown Covered Bridge remains a link to Pennsylvania’s past.

We could all take a lesson from the Lions Club by building our own bridges, lending a hand to others in service, and providing a link from one person to another for a better world.

“Build a bridge by extending your hand.” ~ Ken Poirot

2 thoughts on “Tuesday Tour: a bridge to serve”