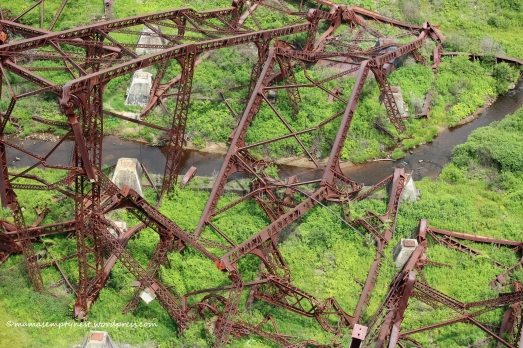 Have you ever heard or seen something that just goes beyond what you call normal? Often times, we shake our heads and say, “Man, that’s twisted.”

This week’s photo challenge theme is exactly that – twisted.

I really haven’t had time to grab my camera and go out to capture a shot that would fit the challenge, so I resorted to my photo files. As I searched for a picture, the image of twisted that sprung forth in my mind was of tornadoes – sometimes called twisters.

I do have a bit of experience with twisters and have witnessed firsthand the devastation they cause. But I’ve never had an opportunity to capture one with my camera. And you know what? For that I’m grateful. I’d rather be safely ensconced in an inside walk-in closet than be sticking my camera out at a funnel-shaped onslaught of destruction.

In their wake, tornadoes leave a lot of twisted debris. The force of a twister is unreal, bending metal, stripping trees bare of their bark, picking up and smashing houses to smithereens.  As I was considering that, a photo I’d taken last summer came to my mind. (The photo above)

On a day trip, we ventured northward and visited Kinzua Bridge State Park located in the Kinzua Gorge. Years ago a tornado slammed into a railroad viaduct there, which was once the longest and highest such structure in the world, and destroyed a good portion of it. Its twisted metal skeleton still remains several feet below the surviving towers of the structure which have been turned into a sky walk.

But twisted things aren’t always the result of something horrific. Sometimes twisted items are things of beauty like this exquisite and huge glass sculpture fashioned by artist Dale Chihuly. One long winter season a few years ago, Papa and I visited our nearby city conservatory and botanical garden just to get a glimpse of color and this sculpture hung in the entrance hall of the conservatory.

So when it comes to twisted things, it’s all in your perspective, isn’t it? Just like life. Are you going to go through these days on earth you’ve been given with a negative attitude every time life doesn’t turn out quite like you planned (that could be really twisted) or will you embrace each day of life with an upbeat spin no matter what happens?

It may take some tweaking here and there, but I’m choosing to twist my attitude. Go for the optimistic. Be encouraging not critical. It’s up to me to decide which way I turn. And on that note, maybe I’ll just go fire up some oldies tunes and if I’m lucky, I’ll hear Chubby Checker singing “C’mon baby, let’s do the twist.”

You’re never too old to twist and see where it takes you.

“Life has many twists and turns and sometimes what looks like a very bad day can just be clearing the way for good things to come.” ~ J. Kim Wright