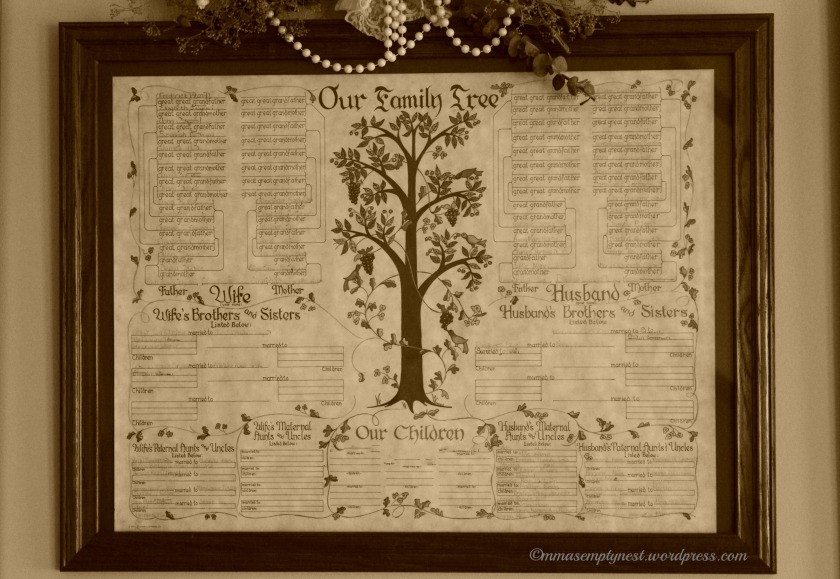 My heritage runs deep here – this place outside of a small town in this particular state.

This place where I can travel down the road about four miles or so and visit not only my parents’ grave site, but also those of some of my ancestors.

We can trace my ancestry back to the 1600’s and 1700’s when my predecessors arrived in the “New World” and eventually settled here. I’m not an avid genealogist like some folks are, but I do enjoy knowing where and from whom I came.

My father was the keeper of that sort of information and long before he passed away, he fashioned a notebook for each of his three daughters containing family history. Included were copies of old photos and a family tree for both sides of his and my mother’s families with birth and death dates.

What’s missing though are the family stories of those who came before me. Those I only know by name and vital statistics. Those who were my great-grandparents and ancestors even further back.  I know when they were born and when they left this earth, but I don’t know much else about them.

What kind of folks were they? What did they do for a living? How important was faith to them? What color were their hair, eyes, etc.? Did they have dreams for their children that were bigger than ones they had for themselves? Did they have any musical or artistic talent? What was their favorite food? Did they vote? And what interesting stories could be told about their lives?

And I wish I knew more about mine. If only I had had the forethought to ask my parents more questions about our family heritage before they passed away, although what they knew was probably a little sparse since their grandparents were deceased when they were young.

Just like mine. All of my grandparents were gone by the time I passed my 10th birthday.

What was my grandma’s favorite color? I don’t know.  All I do know is a relatively small cache of memories I have of my mother’s parents since my grandfather died the same year as grandma. But I remember Grandma when I pull out her handmade quilt that still emits an aroma that reminds me of her and sometimes causes me to shed a few tears.

What exactly did grandpa do with his carpentry skills? I don’t know. But I do know his wooden tool box now gathers dust in my basement and I’ve contemplated what I should do with it.

Heritage is important to preserve, especially for our children and grandchildren. Perhaps one day, our grandchildren will reminisce and wonder more about their Nana and Papa.

But I still want to leave a heritage for them anyway. Not just one of the items we owned or one with special significance, but our life stories as well or the tale that accompanies a particular item that has been passed down from one generation to the next.

Several years ago, Papa and I moved our family of five back here to the homeland when my mother was dying of cancer. Prior to our move and as a farewell gift, a sweet friend presented a book, entitled “A Grandparent’s Book,” to me.

Questions written as if a grandchild were asking them fill the book with spaces for handwritten answers. I’m grateful now that I took the time to ask both my mother and father to complete it before they passed away, although I realized later that Dad didn’t finish it all.

Reading through it provides a little insight into my parents’ lives from young children through adulthood, but it still lacks the sweetness and poignancy of those family stories.

I too completed the blanks in a spiral bound book for my children called “A Parent’s Book,” but again, it lacks the in-depth picture you gain from listening to someone’s history in person, told in their own voice, from their own memories.

I once read somewhere that when we die we become stories in the minds of other people, but what happens when those stories aren’t passed down?

Our heritages are lost when they aren’t recorded or at least written down. In some cases I suppose even the written accounts are lost when descendants find them unimportant and toss them in the trash bin.

So I think it’s vital to share the value of family history with our children and grandchildren.

Because someday, when they are mature in years and their forbears are long gone, they may wonder, “Did Nana ever write a blog and what on earth did she ever write about?”

“How will our children know who they are if they do not know where they came from?” ~ Unknown