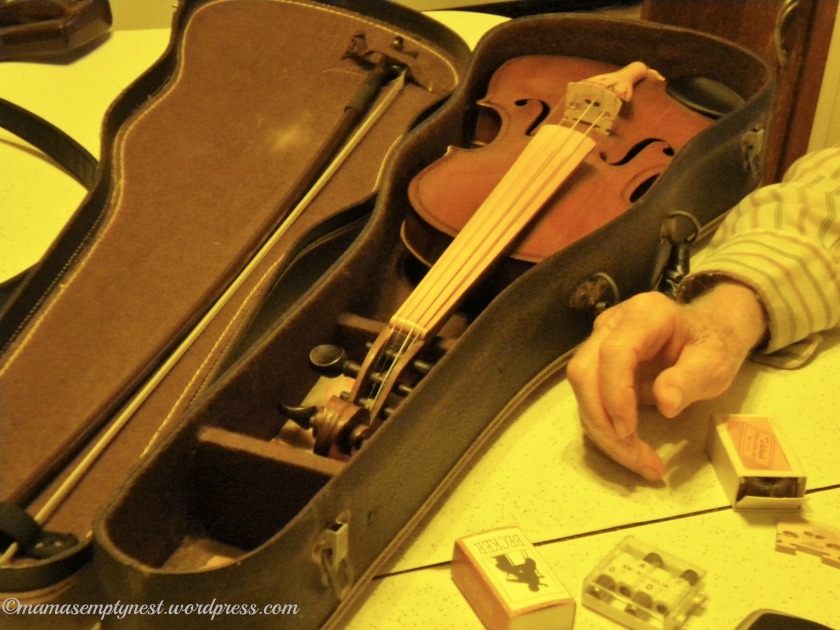 Three years have passed since I snapped the photo above. The lighting was dim and I only had my small digital point and shoot camera with me, but I wanted to capture the moment for later.

I stored that photo in my desktop computer archives and a blog post idea away with it. And then as it always does, time has a way of passing by. And writing ideas have a way of being shoved back to the recesses of my brain where they may or may not be retrieved.

The calendar pages have flipped over to the month of May already and a brand new month found me without any good, solid concepts to write about. So I did what I normally do when I stare at a blank computer screen in an effort to produce a post, I open up my photo library and start viewing pictures I’ve captured but may have forgotten about.

And there it was. A photo of an elderly gentleman from our church showing my sister and me his handmade violin.  Three years ago this month.

Much has transpired in those three years as this kind, gentle, soft-spoken man, a farmer by trade but a talented musician and skilled woodworker passed away this year.

But let me take you back to the evening this photo was taken.

Every year, our church holds a mother-daughter banquet in May.  My sister and I usually attend and sometimes, if her daughter-in-law and grandgirls and my daughter and grandgirl can make it, they come along.

But three years ago, my daughter lived away from home and our grandgirl was just a whimsical thought, a gift waiting to be given to us a year later.

So my sister had a wonderful idea when it came time for the mother-daughter dinner. Since our own mother and mothers-in-law had passed away many years before and our girls couldn’t join us, it would just be the two of us attending the banquet.

Sister’s thoughtful idea was to call a sweet, elderly lady in our church who had never married and, of course, had no children to join us for the banquet. This dear woman was in her 90’s then and relied on her brother (the fiddler) or other relatives to transport her places, so we arranged to pick her up at her family farmstead to ride with us to the church hall.

I remember when sister called Esther to invite her, she replied that she wasn’t a mother. Sis told her but she was a daughter and she could be our mother for the evening since ours was in heaven.  Esther agreed to come.

We traveled down the country lane to her home and helped her climb into my sister’s vehicle. At the banquet, Esther was all smiles, as she usually was, and I do believe she truly enjoyed herself. Afterwards, we drove her back home and she really wanted us to come into the house for a little visit.

We sat at her kitchen table and talked over days gone by, and relatives now long gone, and Esther told the story of how we were distantly related and how her mother and our grandmother were great friends.

Her brother Paul sat with us and shared his stories too and we had a chuckle over the old tale of how he got his name when he was born. One of his older brothers, yet a child, had asked his mother to bestow our mother’s name, Pauline, upon the new arrival. Well, the new arrival was a boy so their mother agreed to name him Paul.

I shared how well I remembered this musical family playing their instruments at church when I was just a little girl.  Each one of their siblings had God-given musical talent. And that’s when Paul got up from his kitchen chair and left the room, returning with a weathered violin case.

He opened it and showed us a lovely violin, one of his own making. He even tuned it up a little and played a bit for us. I marveled at the fact that he had handmade the instrument and how nicely it sounded.

It was one of those sweet little moments in life you try not to forget. When you know in your heart that you’ve done the right thing just by taking the time to spend an evening conversing with two elderly, and possibly lonely, folks of the older generation.

Both Esther and Paul are gone now, but the memory lingers. And I’m so glad to have the photos to remind me of that warm, spring evening in May.

“The older the fiddler, the sweeter the tune.” ~ English Proverb

8 thoughts on “One May evening”